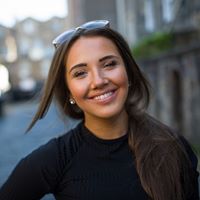 June 2016, a Summer Soiree at Donaldson’s in Linlithgow. A celebration of the achievements and future prospects for those moving on. A community coming together. A young man sitting at the top table bursting into tears upon hearing the first few lines of “O Mio Babbino Caro”. For Matthew Over, one of the five pupils at the school who have Smith-Magenis syndrome, this operatic aria tugged at his heart bringing to the fore the true emotions that are brought out through music. Matthew loves this aria that he calls ‘sad’ music, which in a way is what the composer Puccini intended. With Matthew starting to whimper, the tears started to flow with the rest of the audience.  Ever since this first Soiree, Matthew takes every opportunity he gets to go and hear Ciara sing whether it is busking on Edinburgh’s Royal Mile or concerts in the Lothians. And when he is there in the audience, “O Mio Babbino Caro” is dedicated to him as his special song.

Ciara taught herself to sing watching YouTube recording her first sound on her iPhone to show her family. They, like everyone else since, were wowed by this young lady who speaks with a whisper yet sings like a diva. The 21-year-old Scot is one of the brightest stars emerging on the music scene. Her profile is quickly growing through a range of television, concert and theatre appearances, as well as performing at corporate and private events around the world. Ciara’s reputation is now global, with regular appearances in Europe and beyond as the world continues to be wowed by this young operatic singer possessing a voice filled with such passion, warmth, soul and maturity.

Her rendition of “Nessun Dorma”, as seen and heard on The Voice in 2017, carries a particular significance to the Smith-Magenis syndrome community. “Nessun Dorma” translates as “Nobody Shall Sleep Tonight” which accurately describes the situation for families. Smith-Magenis syndrome is unique in that the body clock, the circadian rhythm, is flipped. Individuals with the syndrome are naturally awake during the night and want to sleep during the day.

The Smith-Magenis Syndrome (SMS) Foundation UK is over the moon that Ciara has accepted the invitation to become their charity ambassador, bringing warm and sunshine to the community and raising awareness of this rare genetic disorder.

Yet with all the behavioural challenges, sleep disruption and medical complications inherent in the condition, the families remain positive and celebrate the warmth and affection shown by those with the syndrome. What better way to show such positives than with Ciara’s singing of “What A Wonderful World”.

What a Wonderful World